Chapter 3 – In route to Paradise Planet

All are gathered aboard the starship. Merci is in her aquarium. Mark and Robert are studying the pilots.

Sailing past the space station, and barely missing the moon, the starship, now called Galactic, slingshots toward Mars. Now the four have time to tell what they saw while exploring as Linda was having her adventure.

Note to wiki contributors: What are their stories?

Ahead is a strange looking cloud. Galactic enters it and disappears.

When it emerges from a similar cloud, Paradise Planet is in sight as a purple luminescent ball.

They are now passing through a breathtakingly beautiful portion of space.

Pilot Mercury points to two other planets in the far distance, and says, “Those are two of the three planets that we wish not to find us, one of which is hostile.”

Mercury: The leader of one planet is threatening it's closest neighbor.  We have no reason to believe they would be any different toward us. We feel we have the best land in the galaxy, and we aim to keep it.

Linda: Are we still in the Milky Way galaxy?

Mercury: Oh yes, we are relatively close to Polaris. You are now part of the Little Dipper.

Linda: Never thought that would happen!

Mercury: Why not? The super-nova that created your solar system (and you) originated in this region of space.

Note to wiki contributors: the last statement is open to revision, based on science.

One hundred years ago, we had a completely different language and lifestyle. Then we started receiving radio and TV signals from earth, traveling through the same wormhole we just went through. This changed everything. We now speak your language and many have adopted lifestyles based on your broadcasts.

Mercury: We are entering our atmosphere. In a few minutes, you will see our planet. 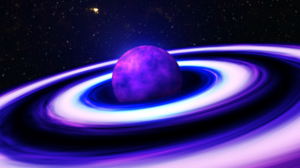